A long time ago in a library far, far away, a mythologist named Joseph Campbell conceived the notion that all of humanity’s stories—from cavemen’s fire pits to religious myths to fairy tales—had certain similarities. They often shared reluctant heroes on quests that seemed slightly out of reach, thresholds to be crossed, mentors who guide us, journeys through alien landscapes (and mindscapes), with a series of trials and tribulations ending in a confrontation with whatever held the most power over them. Then comes death and a kind of resurrection. 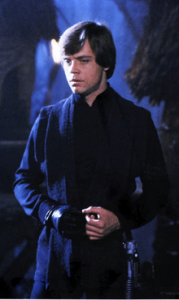 From Lancelot to Odysseus to Walter Mitty to Jesus, every story ever told follows Campbell’s ghostly pattern. Every. Single. Story.

These patterns, Campbell theorized, were timeless because they paralleled our own life stories: We begin in a comfortable space, emerge into a strange new world where we begin a long journey, sometimes with the help, companionship, and guidance of others, then are tested by seemingly endless challenges and disappointments, until we confront the person, flaw, or idea that could make our lives meaningless. The story of us.

Campbell so thoroughly encapsulated his so-called Hero’s Journey that a young filmmaker in the 1970s consciously plotted a whole screenplay, step-by-step, with it. The young director’s name was George Lucas, and the movie was Star Wars.

Almost forty years later, the story continues as the seventh film in the Star Wars series, The Force Awakens, opens with incalculable fanfare.

But these are different times, forty years on. Today, we are deeply mired in a different kind of war with an enemy that is as inscrutable as the the Galactic Empire, with a dark leader as elusive as Darth Vader. ISIS (and other terror cartels) dominate our waking moments and maybe some of our dreams. We don’t always know the good guys from the bad, and we cannot anticipate whether the next attack will come from the front or rear. We are through the looking-glass, sometimes turning on ourselves as we try to sort good from evil.

So it’s no surprise that someone has suggested that Star Wars is really one big allegory about terrorism, that America is the Galactic Empire, and that the heroic Jedi knight Luke Skywalker is, in fact, a radicalized rebel and follower of an ancient religion who is striking back at evil overlords.

Among the parallels in the recent Decider article (where all is explained in much greater detail than these excerpts):

The Decider article makes an exuberant case for the Luke-as-jihadi interpretation. Please read it. We can argue endlessly about the value and validity of such analysis—starting with whether there is really any difference between good and evil if we empathize with our enemies. Fact is, some analogies are weak or meaningless. And the guiding principle of the Internet is that all’s fair in getting clicks. This author might simply be a provocateur or have a political axe to grind. But that’s a conversation for another time, maybe involving good whiskey.

Rather, it’s worth noting here that Campbell was correct: Every story follows a similar pattern, whether it’s about a disillusioned kid on a planet far, far away who is filled with vengeance, or a radicalized kid from a Muslim ghetto who believes he must wage a holy war to find Heaven. Every story viewed from a high enough altitude looks similar. It’s only close up that they are different. Their interpretation is, as always, purely personal.