“In my view, Ron Franscell is one of the very finest and most exciting true-crime writers in America."
—VINCENT BUGLIOSI
Manson prosecutor and author of 'Helter Skelter'

“THE OBITUARY is a damn near perfect mystery!”
—Author John Lescroart, NYT bestseller

“If any modern crime writer should bear the mantel of the
late, great Jack Olsen it is Ron Franscell ... nobody does it better."
—Dr. Vincent DiMaio, celebrated medical examiner

If you brushed your teeth this morning before settling down to read whatever fascinating new material was posted at ronfranscell.com, you unwittingly celebrated a prison inmate.

That’s right. In 1770, British merchant William Addis was doing time for causing a riot. That’s when he decided that the customary tooth-cleaning of his day—rubbing your teeth with a sooty, salty rag—wasn’t the best idea. So he cadged a small bone from a piece of prison meat and bribed a guard for some horse-hair bristles, which he tied in tufts and inserted in small holes in the bones. Voila! The first modern toothbrush was created.

In fact, more contributions to the betterment of the world have come from prison than you might imagine. In a bawdy post at Cracked.com, blogger Bronzulton Q (?) listed five of the most notable inventions or ideas to come from behind bars, including William Addis’ toothbrush. 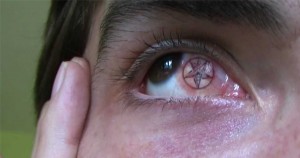 You might be surprised to learn the Erie Canal and the modern carbine were prison products. You’ve heard of the Birdman of Alcatraz (pictured above, looking nothing like Burt Lancaster)? How about Don Quixote?

OK, so these guys were the overachievers of the hoosegow. Face it, most inmates devote their imaginations to tattooing naked women on their scrotums and trying to figure out how to make a shank out of a cockroach. How many times have you said to yourself, “If only these criminal masterminds would put their creative energies to work for the benefit of mankind, the world would be a better place?”

Well, here you have it. Isn’t it nice to know that some inmates have put their “time” to good use?