We know almost nothing of him, except he was a gypsy photographer, drifting the dusty roads of the territories.  Trooping wearily from one far-flung town to another, he’d likely stop his dark-room wagon outside of busy saloons, brothels, maybe even a hanging.  He’d mount his big camera, unfurl his backdrops, and hope word spread before dark there was a man taking pictures in town.

But the itinerant, nameless lensman who stopped outside Beaver Smith’s rough saloon in Fort Sumner, New Mexico, one day in 1880, not only made a two-bit tintype for a young, slightly dopey-looking cowboy who posed stock-still with his Winchester and six-shooter for less than ten seconds.

In less than ten seconds, that unknown photographer captured the most iconic image of the Old West.  He also captured a hundred years of light and shadow, myth and illusion, life and death.

He shot Billy the Kid.

When Pat Garrett shot Billy about a year later, Billy’s life was over.  But this image, roughly the size of a modern-day credit card, gave Billy everlasting life.

Forever, Billy would be this buck-toothed boy, barely a man, in his crumpled sugarloaf sombrero, a scarf and baggy pants tucked into his boots, his Colt slung loose on his hip, his head cocked smugly—even though the photographer had braced his neck for the long exposure.  And only a keen eye would spot the gambler’s ring on his pinky finger.

Cameras might not lie, but they can make myths.  In the coming century, the fact that the image showed his revolver on his left caused many people—including some filmmakers—to assume Billy was left-handed.  In reality, a tintype is a reverse image and Billy wore his pistol on his right side. 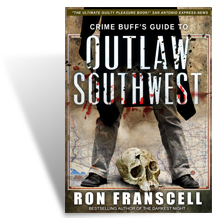 selves, the history of the American West is sharply focused at the center, then grows fuzzier around the edges until it’s a complete illusion.  So it was with Billy the Kid.

This is the single most recognizable image of the Old West, even more familiar than the Fort Worth portrait of Butch Cassidy’s Wild Bunch.  It both reflects and defines the period.  And it is the only authenticated photograph of a quintessential outlaw who launched a thousand dime novels, poems, plays, songs, headlines, and movies.  Did you know Billy the Kid now holds the record for the most films made about any single person in Hollywood history?

His known biography has more holes than his movie victims.  Who was his father?  When and where was he born?  Why did he go wrong?  We’ll likely never know any of those answers.

Although Billy the Kid claimed he killed twenty-one men—“one for every year of my life” he supposedly boasted in what might also be a dime-novel fabrication—his authenticated death toll is only about half that.  More lethal than Butch Cassidy, but a long day’s ride behind Jesse James.

And just as this image doesn’t tell us everything we should know about William Henry McCarty, neither does history.  Much of what we think we know is wrong.  Much of his legend is romanticized and corrupted, either willfully or accidentally.

Most likely, Billy was an uncontrollable juvenile delinquent who was a good shot, a trigger-happy twerp who hung out with a bad crowd, an ordinary sociopath.  Probably not the faithful, wise, bright, young, and tragic rebel of myth, where he’s been portrayed by the heroic likes of Paul Newman, Buster Crabbe, Val Kilmer, Roy Rogers, and Audie Murphy.

The romance obscures our vision.   Like Butch Cassidy and Jesse James, some people believe Billy the Kid never died in a blaze of glory, but rather finished out his years as an aged, infirm codger who never committed another crime after his fake death.  For all three of those outlaws, that would be unlikely.
But that picture keeps Billy alive.  In 2012, the only known image of Henry McCarty sold for $2.3 million, not because it was the last tintype ever made, but because of the light and shadow, the myth and illusions, the life and death we call Billy the Kid.

This is excerpted from Ron Franscell’s new edition of The Crime Buff’s Guide™ to the Outlaw Southwest, published by WildBlue Press on April 20, 2017.

BUY IT NOW AT AMAZON!