Today, it’s been 71 years since Elizabeth Short’s grisly parts were discovered in a vacant Los Angeles subdivision, sliced cleanly in half and posed lasciviously. This obscure waitress suddenly became far more famous in death than the Black Dahlia (as we know her now) ever dreamed in her brief life.

Breathing, she was just another pretty face. In chunks on a roadside, she was a media sensation.

And she still is. 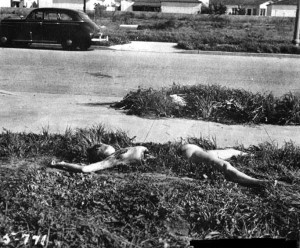 The Black Dahlia case remains America’s coldest case, an unsolved mystery of inestimable proportion. Short’s disconnected and disturbing corpse lies buried today in Oakland’s Mountain View Cemetery. Nobody knows where her killer might lie, or whether he’s even dead; certainly if he were 30 years old at the time, there’s a chance of a living, breathing, 99-year-old geezer with blood on his hands. We cannot know—and likely never will.

We’re left with supposition and guesswork. Legendary FBI profiler John Douglas believes the Dahlia’s killer was a white man in his late 20s or early 30s. He probably had a high school education, lived alone, drank heavily, and had money problems, and worked with knives and blood, maybe as a butcher or in a slaughterhouse. The dismemberment suggests he was precise and patient. He probably spent several days with Short, and kept her alive through most of it. Douglas thinks the body was cut in half partly to make it easier to transport, and partly to dehumanize his victim. Her breasts and genitals were grotesquely carved, which also “defeminized” her, Douglas said.

The profiler also believed the dump site was purposeful. The killer had some personal connection to the neighborhood. 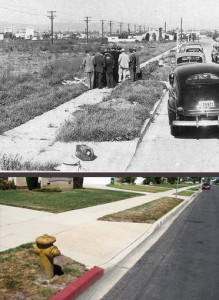 Note the hydrant in foreground

In the fall of 2015, I visited the crime scene where the body was found in 1947. My tour guide was Steve Hodel, a former LAPD homicide detective and NYTimes bestselling author who believes his own father, Dr. George Hill Hodel, killed the Black Dahlia. (Rather than summarize his explicitly and exquisitely detailed argument inadequately in 50 words, I suggest you check out his series of books on the subject, starting with Black Dahlia Avenger.)

Today, it’s a quiet little neighborhood, a tract full of neatly kept, post-war homes and manicured lawns that looks like a set for a Baby Boom, coming-of-age movie. Using original police reports about the body’s location—54 feet from the hydrant you can see in these photos and just inside the next driveway entrance and sidewalk— we were able to precisely locate the spot. Steve has a theory about his father’s choice of this place, and it has to do with another unsolved killing he attributes to his father.

But I believe in ghosts. Not the ethereal, semi-transparent phantasms at the top of the stairs, but in the haunting memories that we associate with physical places like Dealey Plaza, Cielo Drive, Ford’s Theater, and the World Trade Center. To me, these places have a life of their own, and we carry it around in us. I wanted to see this spot mostly because it is the epicenter of our doubts and fears about crime and punishment in our world, even (and maybe especially) today. 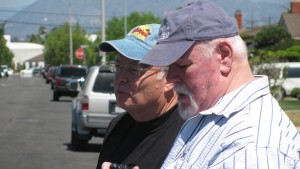 The Black Dahlia still fascinates America 71 years later mostly because of the grisly circumstances—the girl was chopped in half, for god’s sake. It echoes Jack the Ripper, who still fascinates us, too. It sends shivers down a million spines that fear they might be the next random victim of a psychopathic slaughter-boy. A hundred books, movies, and cautionary tales have hung their fleshy narratives on Elizabeth Short’s discombobulated skeleton.

Our fascination might be about mystery, sex, Hollywood, or dismembered corpses. It might be about cautionary tales. But it isn’t about empathy. This victim is most commonly known by a colorful media nickname, and most people who have heard of the Black Dahlia have no idea who Elizabeth Short is.

Elizabeth Short captures our collective imagination as this pretty girl—this pretty, loose, and “do-able” girl who would catch every man’s eye and be familiar to every woman who ever felt lost and alone. We hear her stories about seeking her dream in Hollywood and ending up on the edges, and the stories (not all true) about sex romps, and then we see those photos of her spread-eagled and dismembered in a vacant lot … and we imagine what erotic, sadistic things might have happened in the hour before. We conjure those dirty, dirty pictures in our minds and we keep coming back to them whenever we are reminded of this case.

Will the Black Dahlia’s murder ever be truly solved? My dear friend Steve Hodel believes it is, and he makes a good case. Others aren’t so sure. Theories abound, physical evidence is non-existent. I suspect no public authority will ever close the case officially. And even if one did, there’d be a few more generations of alternate theories, a la the Warren Commission. In short, justice is left perpetually undone.

Humans naturally want to know every answer. True crime writers (like me) revisit this case routinely, as if poking around in the Dahlia’s gore will reveal a final answer overlooked for almost seven decades. Ordinary folks don’t often pursue elusive answers with gusto, but they prefer to know the facts. Well, except when the myths are juicier.

Bestselling crime writer Ron Franscell is the author of MORGUE: A LIFE IN DEATH (with famed medical examiner Dr. Vincent Di Maio) published in 2016, and THE CRIME BUFF’S GUIDE TO OUTLAW LOS ANGELES (2017).