The secret of my success as a writer is that I never pick a story I can screw up. “ShadowMan” struck me as such a story. To me, its power was universal stuff like a mother’s anguish, determination, and fear of the dark.

I first heard about this case when I was a senior writer at the Denver Post, where I wrote about the evolution of the American West. It had no shape or context, just a terse factoid about an unnamed little girl who was kidnapped from a Montana tent in the 1970s and drew the attention of early profilers … that’s about it. I wanted to know more, but it was a rabbit hole I didn’t have time to explore. 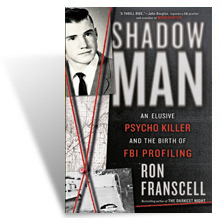 Later, I circled back and discovered it was more than a simple kidnapping. Much more. It was a grotesque series of crimes in a part of the country where I grew up, and a turning point in forensic history … and nobody had ever told the whole story. Hell, most people outside of Montana—even crime buffs—had never even heard of it.

The deeper I dug, the more I wanted to know. I was finding history in a peculiar place. I began to see parallel dramas on a collision course. But it all came down to one little girl who’d vanished in the night. When Susie Jaeger became real to me—when I thought I could hear her voice in the dark—I knew I’d write “ShadowMan.”

I wanted to tell a compelling story, not follow a predictable formula. I sought to blend storytelling and journalism in a kind of literary documentary. Eloquent, dramatic, and powerful. I needed characters not sources, dialogue not quotes, heartbreak not exploitation … truth not fiction. That required a lot of tiny details that’d probably be thrown out by potboiler true-crime writers, like a halyard clanking against a small-town flagpole or a mother’s dreams about her dead child. Those details only come from being there and asking unexpected questions.

For “ShadowMan,” I traveled from Texas to western Montana four times in 18 months, talked to about 150 people—many of whom personally knew the players in this tragedy or were part of the investigation—and I walked in the footsteps of a shadowy killer and the men who hunted him. Court records and local police files in this small Montana town have all vanished in the past 50 years, but I collected more than 13,000 pages of the FBI’s original case file. I couldn’t avoid some rabbit holes, but when I thought I knew more about this complicated case than any living person, I was ready to write. I finished six months later.

That’s the kind of story I like. If I’m going to spend a year or two of my life immersed in all the gore and mayhem, I at least want to see some purpose, some blue sky. I get so close to these particular flames, I want it to be worth the risk.

And today, “ShadowMan” is finally the book I imagined. I never tell true-crime fans to “enjoy” my books, but I genuinely hope this one moves you.

AVAILABLE HERE OR AT YOUR FAVORITE INDEPENDENT BOOKSELLERS: