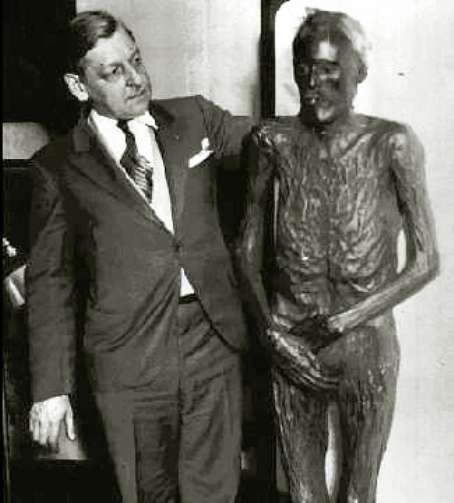 Is this mummy John Wilkes Booth?

Washington D.C. isn’t known as the “District of Crime” or “Murder Capital of America” for nothing. Though the capital city’s motto is “justice for all,” D.C. has a darker side, including an extensive history of crimes and misdemeanors, some political and some not. The Crime Buff’s Guide to Outlaw Washington D.C. is the ultimate guidebook to the criminal and seedy history of the nation’s capital — plus Maryland, Northern Virginia and (ironically) Arlington National Cemetery. It also contains an entire chapter pinpointing key and little-known sites in the Lincoln Assassination. With photographs, maps, directions, and precise GPS coordinates, this collection of outlaw tales serves as both a travel guide and an entertaining and enlightening read. It is a one-of-a-kind exploration into well-known and more obscure sites in D.C. that retain memories of bandits, corpse-snatchers, murderers, snipers, bootleggers, assassins, rogue scientists, spies, mobsters and corrupt politicians — even a legendary serial killer dressed in a bunny suit — and their scandalous deeds.

As with the popular previous CRIME BUFF’S GUIDE™ books, this quirky and fascinating travel book literally takes you to the scene of the crime with photos, maps, histories and GPS coordinates! From the Lincoln Assassination and Watergate to the Beltway Sniper and cannibal/killer Albert Fish, OUTLAW WASHINGTON DC promises to be a headlong romp through the criminal history in the heart of America’s capital. Ideal gift for the true-crime and history lover in your family!