The story you are about to read is true.
No names have been changed to protect anybody. I’m not that creative.

The city is Beaumont, Texas. I carry a chewed-up pencil, a ratty notebook and my fingers are stained with bubble-jet ink. I’m a newspaperman.

It was 3:56 p.m. on Tuesday. It was muggy. I was working the morgue—that’s newspaper talk for the room where we keep all our old clippings.

It’s not much of a life, unless you don’t mind missing an Astros game because the hotshot phone rings. Unless you like working Saturdays, Sundays and holidays at a job that doesn’t pay overtime. Oh, the pay’s adequate—if you count pennies you can put your kid through summer camp, but you better plan on seeing Florida on your television set. And the coffee, well, it ain’t Starbucks, lady.

Anyway, I was scanning the minutes of a 1955 Rotary meeting when something caught my eye.

It was a 50-year-old story about a dummy getting a haircut. A ventriloquist’s dummy. The front-page headline blared: “George, Bible-Quoting Dummy in Pastor’s Family, Has Terrible Secret.”

Something told me—perhaps years on the beat where you’ll have few facts and a lot of hunches, and you’ll run down leads that dead-end on you—that a dummy’s hair doesn’t grow. Call it a hunch.

I decided to investigate. 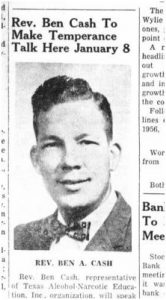 Just the facts: At the time, George was the cohort of one the Rev. Ben Cash of Calvary Baptist Church in Nome, Texas. The 29-year-old preacher had taught himself ventriloquism while driving to college classes every morning at Lamar Tech in the 1950s. Seems he jiggled his rear-view mirror so he could watch whether his lips moved when he spoke. (Note to Gannon: Slap this perp with a traffic ticket.)

The Rev. Cash coaxed George to quote Scripture in Sunday School and camp meetings. He tested his routines on his 4- and 8-year-old children. Once, he even performed on a local kids TV show in Beaumont. He was a big hit with kids.

But George was tired of being the sidekick. Made of cheap cloth and plastic, he wore toddler cast-offs. He only could speak when spoken for. He also was bald, with painted-on hair. Something had to give.

Back in 1955, the Enterprise story offered a clue — or maybe just a stupid observation: “George sincerely hopes he’ll be able to live down his ‘sissy’ reputation.”

That day, the Rev. Cash took his cohort to the big city, Beaumont. Bad things happen in big cities, especially to dummies. With the help of hair stylist Eula Mae Holden, Fertitta’s Shoe Service and a place called the Doll Hospital, George was given a whole new identity. He got new moving eyeballs, some strings to move his arms and legs, a tuxedo and new shoes. He also got a girl’s curly red wig, which was promptly shorn into a swell cut. At least that answered how a dummy could grow hair.

I began to wonder: Where’s George?

4:35 p.m. I knew my only chance to find George was to find the Rev. Ben Cash. How hard could it be to find a 79-year-old Baptist preacher in Texas? They’re everywhere. I made a few calls.

In this game, you walk your beat and try to pick up the pieces. Do you have real adventure in your soul? Oh, it’s a thrill a minute when some housewife thinks you’re a telemarketer and hangs up all six times you call.

Turns out, the Rev. Cash retired in Port Aransas. He grew up in Normangee, and after a couple military enlistments, he attended college and preached at churches in Silsbee, Nome, Spurger and other Texas towns. Now confined to a wheelchair by a series of strokes, he left the pulpit in 2000.

But George didn’t run away.

The Rev. Cash gave George away. That’s his story. He doesn’t remember to whom he gave George or when, but it was another preacher, he’s sure of that. And he taught him a few ventriloquism tricks, too.

“So you don’t know where George might be today?” I asked.

The Rev. Cash got a new dummy. He still owns that British model, one with a real wooden head, he named Cary. Why? He wanted to entertain as “Cash & Cary.” (Note to Gannon: Are bad puns a felony?)

8:29 p.m. A dead-end in the hunt for George. Maybe he was tossed on the scrap-heap of ventriloquism with all the other woodenheads who never realized their Howdy-Doody dreams. Maybe he got mugged by some pill-head woodpecker high on crape myrtle. Maybe he just got tired of being strung out.

That’s how it is out here.

After a few years on the beat, you have the ability, the experience and maybe the desire to be an editor. If you like to fly by the seat of your pants, this is where you belong. For every story that’s written by somebody else, you’ve got 3 million ways to do it better. And most of the time, you’ll have few facts and a lot of hunches. You’ll work some days that last a week, but some days are more like two days. You’ll send a reporter back to the street until you’re sure she’s talked to everybody in the state of Texas.

George, aka The Dummy, remains missing, even after four hours of non-stop Googling.

Where’s George? I won’t sleep until I find him.

Or until later tonight.

(Anybody seen my pencil?)